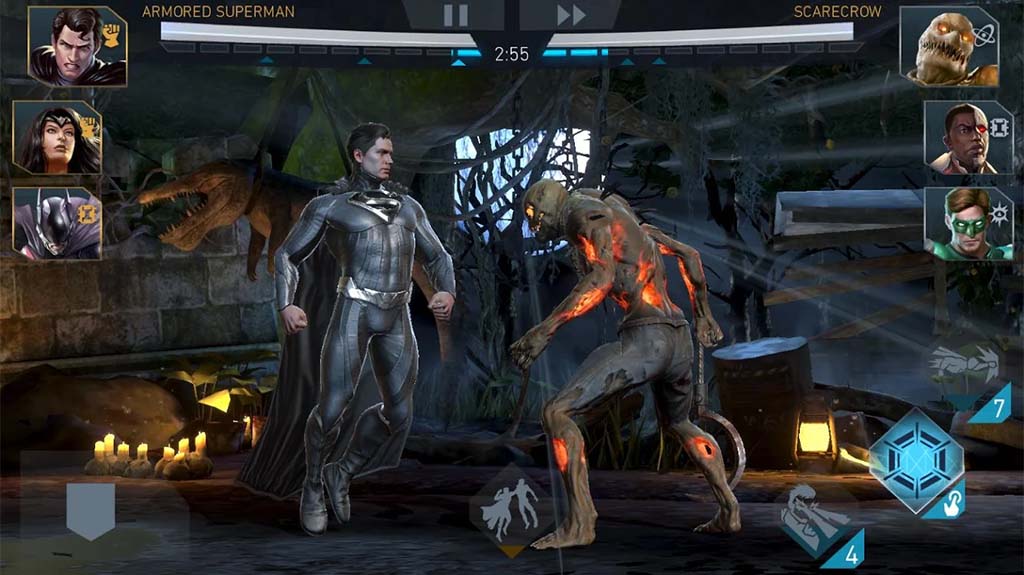 With Marvel’s rise in the last decade or so, creating blockbuster movies and popular video games, DC Comics has fallen behind their main competitor. They have been trying to emulate Marvel’s success, but so far, they have fallen short. Although Batman movies have been traditionally well received, their other ventures into the cinema have disappointed. Movies like Suicide Squad and Batman vs. Superman haven’t turned out as popular as expected.

However, DC is far from being a washed-up comic publisher. The fans of the DCU are still in good numbers, looking for new releases containing DC superheroes. There are a lot of PC and console games featuring DC characters. Although not as good, you can also play multiple mobile games on your phone to kill a bit of time and get some excitement on your device. Most of these games come from established developers, including Warner Bros and Cartoon Network. They don’t come in great numbers, but those around are well worth your time! Check out our list of top five DC Comics games for Android.

One of the most popular games from the DCU — not just among mobile ones, but overall. Injustice 2 is a fighting game which features a 3v3 combat system. You can collect from a huge cast of DC heroes and villains, level them up as you go, and then put them into battle. It’s not the most complex fighting game you can find, as it revolves mostly around simplistic move combinations and mechanics. Most of the time, you’ll just tap and swipe, so the game certainly went for appeasing a casual playing audience.

Every character has their own set of abilities, skills, and perks, so there’s a bit of strategy involved when forming your three-member squad. Watch out for not falling for the trap of buying additional in-game loot, as this is a freemium game. If we’re being honest, the console version of it leaves the mobile version in the dirt, but it’s still a great game to enjoy on your Android.

Product of Warner Bros International Enterprises, this app is all about educating your kids on women’s empowerment. Joking aside, it’s a game aimed at children which revolves around female DCU characters — both heroines and villainesses. The story places them in a high school, where they study together. Through the campaign, you have to complete various high school-related tasks, and you can create your own characters (female ones, of course).

You have a lot of mini-games to look forward to, as well as short webisodes to watch. If you’re a DCU diehard fan, you’ll notice that there’s no particular story arc here, since there’s no comic in which they all went to the same school. With this in mind, it’s not something for older boys, but something for kids to enjoy. If you’re looking for something to enjoy with your young one, this is definitely a game for you.

Lego’s own developing company worked on creating this game. Not to point any fingers, but it’s a completely free game, as opposed to Warner Bros’ freemium apps. It’s a well-designed racing game, with everything, from characters and vehicles to background structures, being in, unsurprisingly, lego art style. If you’ve played Angry Birds GO, you’ll notice the similarities in the go-kart gameplay. It’s not a hard game to master, due to its simplistic mechanics. The graphics are colorful and bright, bringing a high level of aesthetic appeal.

There are two ways you can play the game. You can select one of the villains and run away from the chasing Batman and Superman. Alternatively, you can reverse the roles and choose one of the superheroes to go on a villain hunt. There are also some elements of non-racing gameplay between different races.

You’ll stumble upon some bugs and performance issues, but who can complain about a completely free game. It’s a casual racing game which anybody can kill a bit of time with and enjoy. But, the artistic style and the storyline make it so that it’s obviously aimed at a younger audience.

Coming from Warner Bros, DC Legends: Battle for Justice combines a mobile RPG with gacha elements for loot boxes. It’s a freemium game, but you can still enjoy it comfortably without reaching for your wallet. The game revolves around your collecting DCU characters and progressing with them by leveling them up. Once you’re on a high enough level, you can go into boss fights and earn rewards for defeating them.

DC Legends is similar to other mobile RPGs, so if you’re a fan of the genre, you’ll know your way around in no time. You can play in an online PvP mode, or complete a solo campaign. In the online PvP, you have to watch out for some of the characters which are too OP, but other than that, it’s a fine game that will let you kill some time.

GO and GO Figure are arguably two of the best mobile games coming from the Teen Titans universe. They are connected in story and style, which is the reason why we’ve decided to put them together. It contains a gacha gameplay with some RPG elements. The fact that it’s a free game and not freemium is quite a rarity for a gacha app (there are some in-app purchases in GO Figure). Your job is to unlock and collect various characters so that you can build a team which will be able to stand up and beat the baddies.